Many developers have been in a situation when their project is stuck because of outdated dependencies. Security vulnerabilities are found in an old dependency. Node.js version is getting out of life, and your project just couldn't compile on the newer version. Many deprecation warnings in the terminal and browser console.

To keep the codebase healthy, dependencies should be kept up to date!

Some pros to keep dependencies always up to date.

There are some cons:

But the pros outweigh the cons. 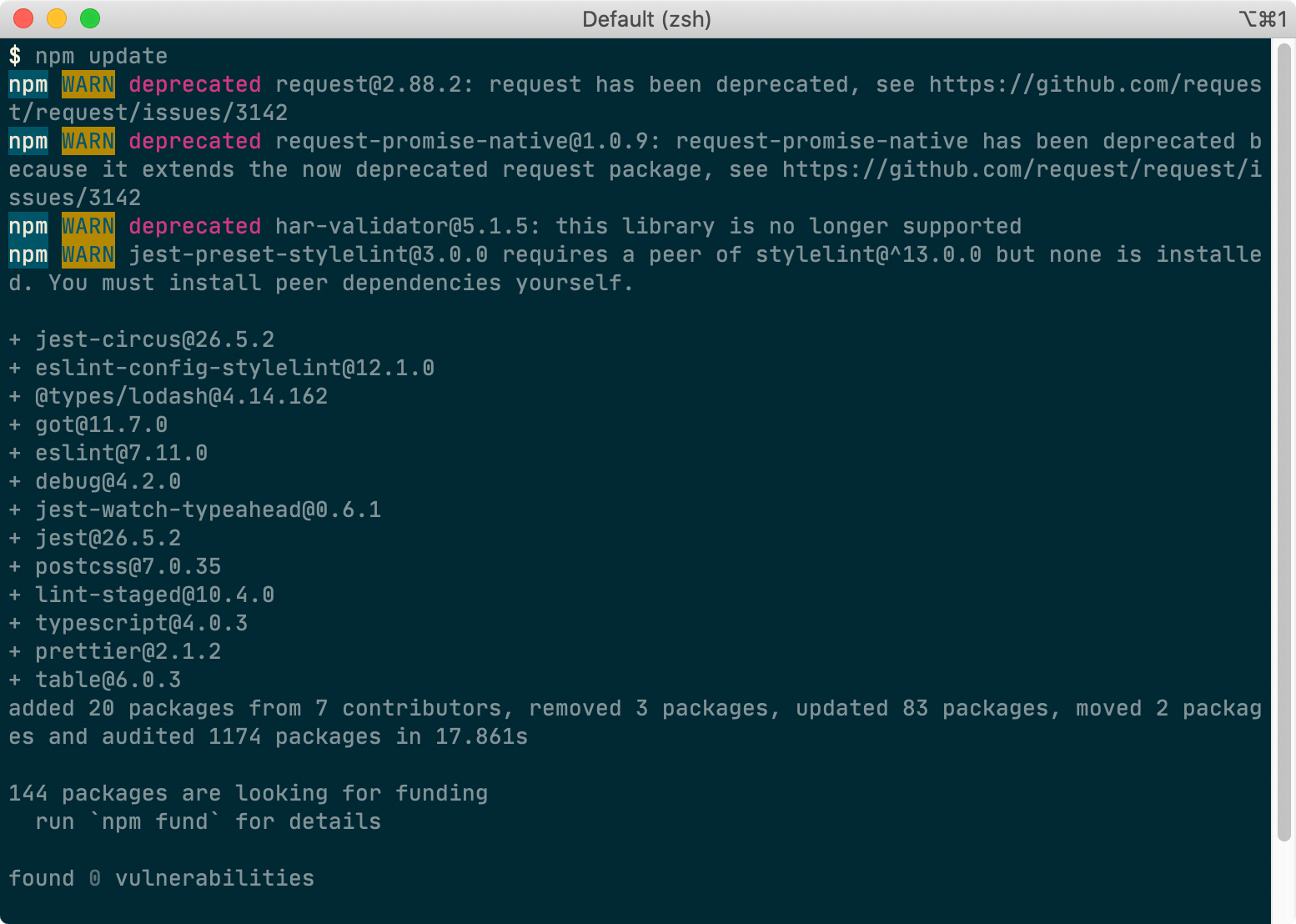 It is not possible to select only a few dependencies, so it installs everything. Sometimes minor version has bugs, and we don't want to update them just yet. With npm update the only option is to pin the version in package.json, and then unpin it when the dependency is fixed. 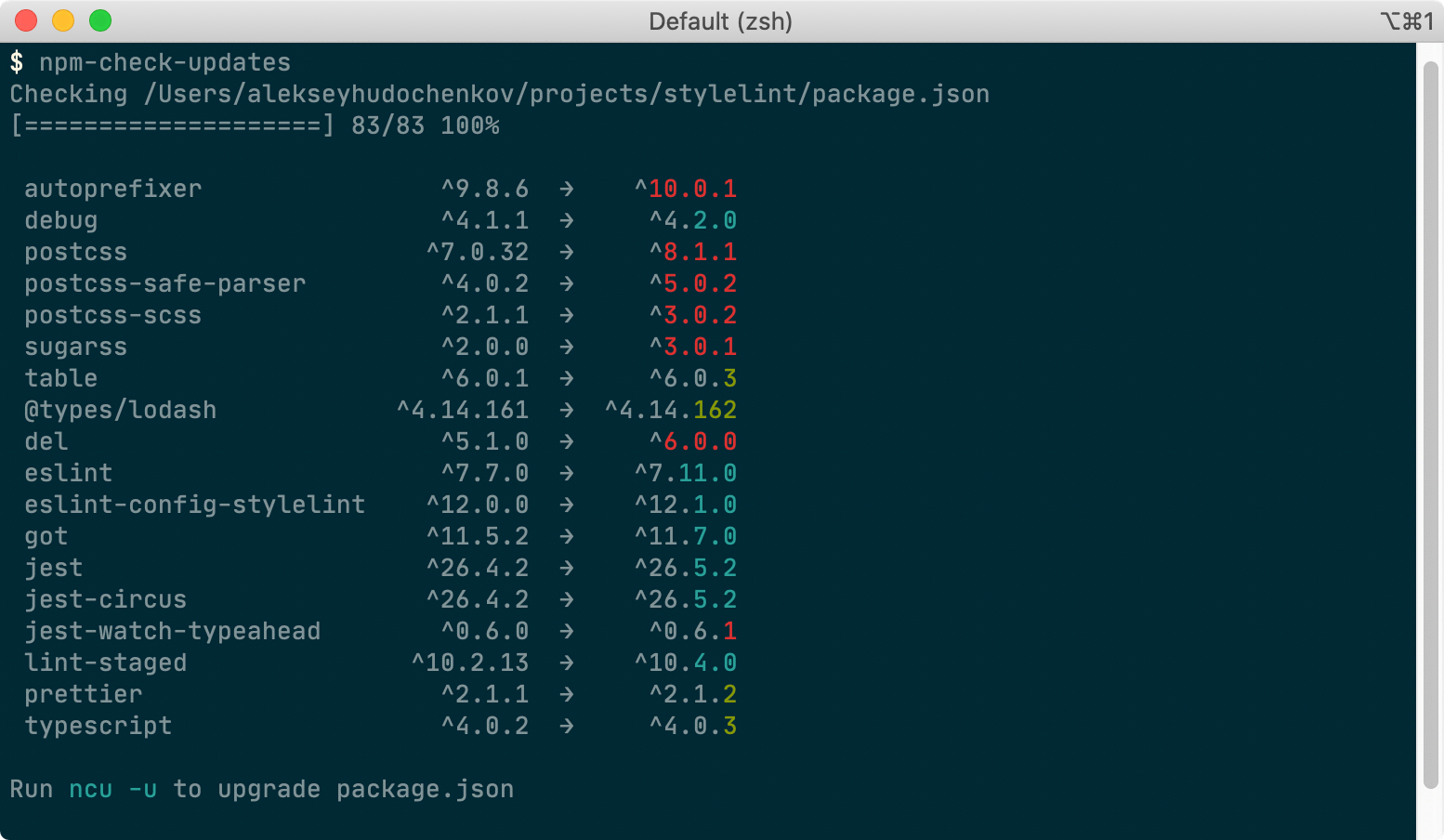 Unlike npm update it updates everything to the latest version ignoring the semver range specified in the package.json.

npm-check-updates has an interactive mode, where it asks whether it should update each dependency: 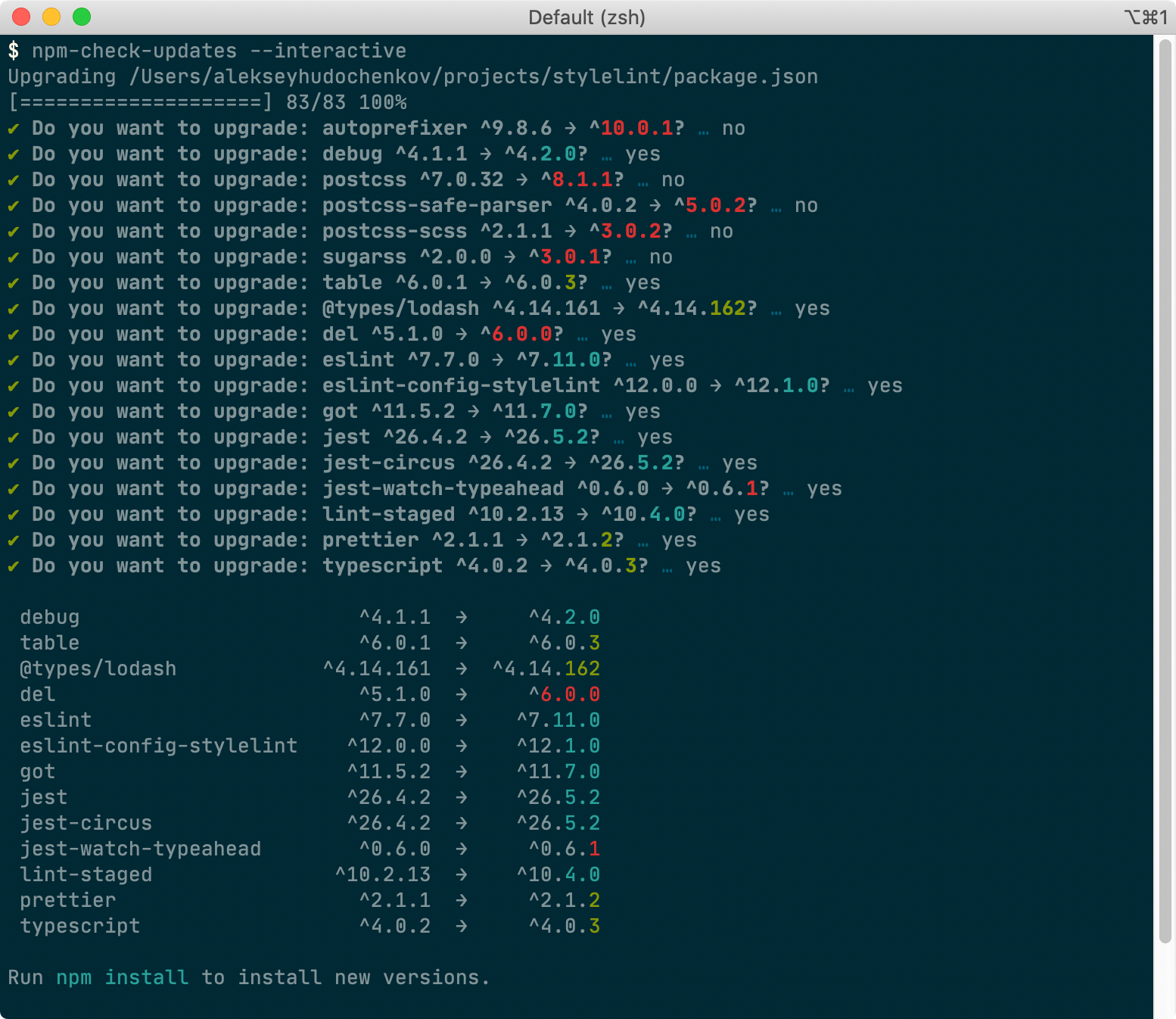 It's not possible to end progress with saving progress in the middle of dependency questions. You'll have to answer to every question, even if you want to update only the first few.

npm-check-updates updates only package.json, you need to run npm install after it. 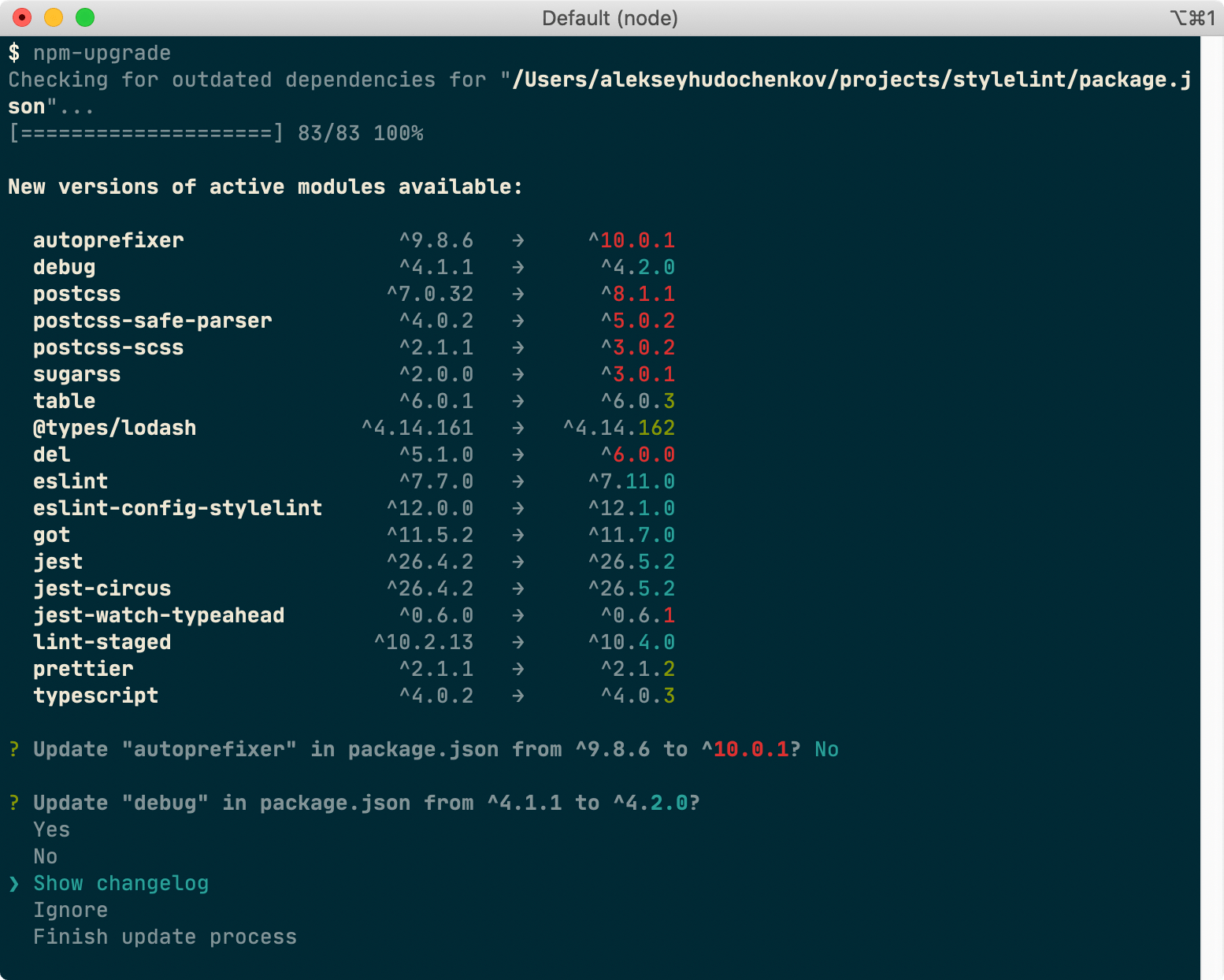 Unlike npm-check-updates you could finish answering questions in the middle of the list and still keep the progress (“Finish update process” option).

npm-upgrade provides a quick way to see changelog for each dependency. It tries to find a changelog in the repository, or “Release” page on Github. Sometimes it fails to do so, but at least it will open the repository, and you can find changelog yourself.

npm-upgrade updates only package.json, you need to run npm install after it.

npm-check has a convenient interactive mode. It groups versions (major, minor, patch, non-semver), and unlike previous tools you can go through the list with arrow keys and select dependencies with a space key. 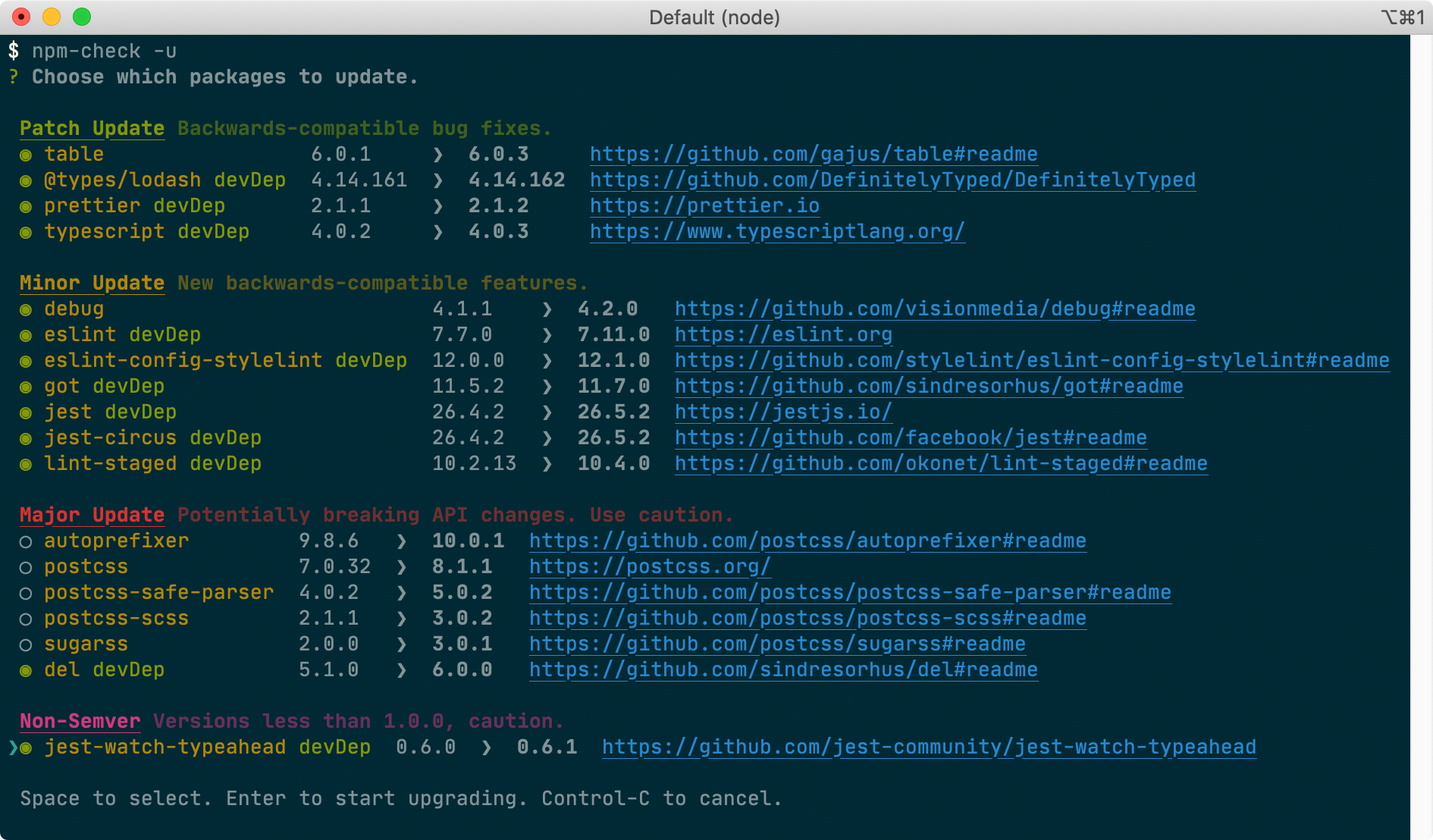 How I update dependencies permalink

Most of the time I use just npm-upgrade because it allows selectively update dependencies and easier access to changelogs. Sometimes I use npm-check.

I prefer to update dependencies every two weeks on Monday. Updating on Monday gives enough time to catch something weird or some regression, and have a calm weekend :) 99% of the time, there are no issues after an update.

Usually, I update dependencies in a few rounds:

Almost after every round I run tests and check in browser (for client-side projects) areas that could be affected by just updated dependencies.

I commit changes after every round. If new dependencies cause problems, then it would be easier to find the cause, and no need to redo previous rounds.

After updates are done, I run tests again and check all affected areas in the browser, if applicable. Clean Git history by merging all commits into one.